Some of the most mature, socially-emotionally intelligent tween and adolescent girls I know feel lonely and out of the loop with peers. It used to shock me, but no longer. Their stories have revealed the truth behind their disconnection. 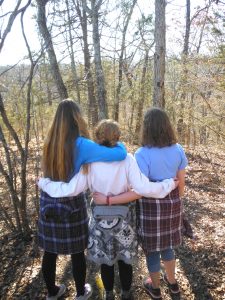 Madeleine, 15, was ditched by her group of friends in 7th grade after they chose to hang out with the more popular group at school. She didn’t like the way they treated other girls, and refused to go along with their cruelty. So they excluded her and spread rumors about her. Madeleine has had a hard time trusting people ever since.

Her friends often call Grace, 13, “mom” because they all go to her with their problems. She is a great listener, nonjudgmental, and incredibly insightful for her age. Grace’s friends also attempt to pull her into the middle of their squabbles, but she refuses to take sides. Her ‘friends’ get mad at her for refusing to play along, and so they exclude her.

Andrea, 17, doesn’t take crap from anyone. If girls say disrespectful things to her, she calls them out and moves on from that friendship. She has been willing to stand up for herself and others her whole life, resulting in lot of girls despising her for it. Queen Bees don’t like girls who won’t give them their power.

What these girls share is an uncommon maturity, confidence, and wisdom; what I’d describe as ‘old souls’. They understand relationships and life at levels way beyond their years, making it hard to connect with the petty dramas that swirl around them each day at school. They refuse to play the hurtful playground politics with peers, and this sets them apart. It’s a hard row to hoe because they have a tough time finding like-minded souls to connect with, leaving them feeling alone and isolated.

Anthony De Mello, in his book Awareness, describes one way for these girls to approach their less mature friends. He calls it, “I’m an ass, you’re an ass”. People in their right minds don’t exclude or bully friends; but most people are sleepwalking through life, even as adolescent girls. They are so caught up in fitting in and being popular, and so afraid of losing friends and being alone that they don’t act out of their best selves. Therefore, don’t expect more from them. Understand and accept them where they are, and do your best to find people who match your level of maturity and knowing. Embrace this philosophy and you won’t be so disappointed with the insecure behavior of peers.

I encourage girls not to write off less developed peers; they can go out with them and have fun, just don’t trust them with their deepest secrets. It’s okay to have several levels of friends: close friends you trust with everything, and acquaintances you only connect with at lower levels.

These old souls are ahead of their time, and may not find their tribe until late high school or college when peers catch up to them. They need safe spaces like my retreats and camps where they can be appreciated for the wisdom, courage, and integrity they bring to a group. Being fully engaged in things they are passionate about also brings them the joy and fulfillment they miss socially. Notice these girls and affirm them for the amazing people that they are.