Best way for kids to overcome their fears? Go for the roar!

Learning to deal with fear is one of the most important lessons kids can take with them when they leave the nest. I find that most kids I work with haven’t been given solid tools to push through fears, making them less likely to take risks and initiate new ventures. We need to correct this if we want young people to be bold, creative, and entrepreneurial. 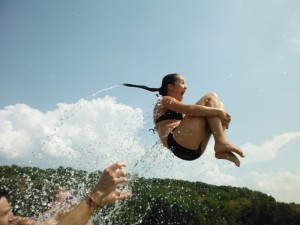 20 years from now you will be more disappointed by the things you didn’t do than by the ones you did do. So throw off the bowlines. Sail away from the safe harbor. Catch the trade winds in your sails. Explore, dream, discover. Mark Twain

During adolescence, girls are more than twice as likely to have an anxiety disorder than boys, and this trend continues through adulthood. A study in the Journal of Pediatric Psychology reported that parents are four times more likely to tell girls than boys to be more careful after physical accidents, causing girls to be less likely to try challenging physical activities which are vital for developing new skills. A 2014 study by Keds and Girls Leadership discovered that boys were more likely than girls to say they were brave. Girls need some guidance when it comes to feeling their fear and doing it anyway.

Here’s a story I tell girls at my camps about overcoming their fears.

Lions in Africa have an interesting method of hunting gazelle. The young lions hide in the brush downwind from a herd of gazelle, and when they are all set up, the oldest male lion in the pride goes to work. He is weak, can’t run, has no teeth, but he can still roar with the best of them. So this old guy sits up and growls loudly; the gazelle hear him and smell his scent, and where do you think they run? Away from the sounds and right into the teeth of the younger lions who eat them all up. The moral of the story: in your life, when you hear the roar (feel your fear), the tendency is to run away from it or avoid the situation. This makes the anxiety go even higher, causing you to be even more afraid to proceed. Instead of this, encourage kids to go for the roar, to go towards and through their fears because they will find that what they were afraid of has much less ‘teeth’ than they thought.

I have girls think back to past experiences when they were anxious about an upcoming test, tryout, recital, or tournament. They can recall that when the time came to perform, things almost always worked out just fine. Even if something did occur, they were able to handle it. Going for the roar keeps girls out of feeling stuck, frustrated, and paralyzed with fear.

I’ve been absolutely terrified every moment of my life and I’ve never let it keep me from doing a single thing that I wanted to do.  Georgia O’Keefe 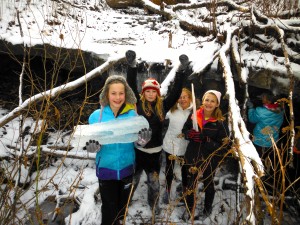 Don’t tell your daughter not to be afraid; teach her that everyone has fears, and what’s important is to face them with courage and not let worries cause them to miss out on opportunities. Every time a girl goes for the roar, she adds another brick to her confidence collection and self-esteem. This self-assurance is earned, and more confidence means greater belief in oneself, making them more willing to take risks and say yes to the adventures Mark Twain was talking about in his quote. Teach girls to value bravery as much as boys do, and be sure to affirm their acts of courage when you see them.