Alexa, 14, has bravely faced some really tough challenges in her young life, and so far has come out on top. Her parents started fighting when she was a little girl, and it escalated over the years. She did her best to distract herself, spending hours in her room drawing pictures and reading, her escapes. It got tougher when her little sister Sammi came along, because she felt the responsibility to shield her from the chaos as best she could.

Her dad started drinking when she was in the third grade, spending more and more time out with his buddies. Alexa passed it off as a good thing because there was less chance of her parents arguing. But the battles intensified the nights he came home drunk, and she grew afraid of her mom getting physically hurt. Her mom grew more and more distracted and depressed, which put more responsibility on Alexa to cook and clean and care for Sammi. A divorce finally ensued, and though the fighting abated, her mom remained depressed and her dad continued drinking. She hated going to her dad’s house because he was so inattentive and unable to connect with her. He finally started a treatment program, and for 6 months was sober and coming back to his old self.

How did Alexa take care of all of her emotions? She kept really busy and distracted as a way to not feel because she was so afraid that if she opened the floodgate to her emotions that they would never stop. She also became her peer’s “therapist,” and her best friends even called her “mom” because of how she was always there for them. It gave Alexa a sense of fulfillment, and by focusing on other people’s problems it kept her from thinking about her own. It “worked” for a while, but slowly she became progressively sadder and lost her motivation and didn’t know why. That’s when she came to see me. 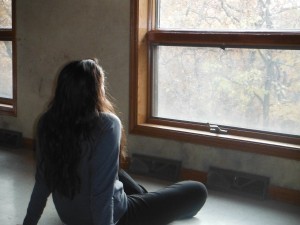 Alexa has worked hard to make sense of what she has experienced in her life, not taking on her parent’s issues and feelings, not feeling so responsible for her sister and everyone else in her life. She has learned to express her emotions in healthy ways, and her joy and life force has come back. Alexa has had some heart-to-heart talks with both of her parents to let them know how she is feeling and what she needs from them.

Things had gotten so much better, and then the hammer dropped again recently when her dad relapsed. It threw the family back into chaos and it’s old patterns, and Alexa started feeling stressed again. With support, she is keeping her head above water and not allowing herself to fall back into her old numbed out ways. She is determined to not let her family’s story become her story, and to be in charge of what her past experiences are going to mean for her. Alexa is spending more time journaling and painting which are great channels for her emotions and good for her soul.

I am so proud of Alexa. I love her strength of character, how compassionate she is, how resolute she is in her growth, and her determination to make her life the way she wants it.

In my eyes, Alexa is a hero.