Throughout this election season, our children have frequently witnessed adults behaving badly. They have seen innumerable occurrences of disrespect and incivility, and scant few adults modeling true strength and leadership styles. Let me offer two stories that exemplify the best in human character.

An old Zen master was talking to a group of his students when an angry warrior confronted him with insults, even spitting on the master. True to his character, the Zen teacher was undeterred by the man’s behavior, resulting in the warrior stomping off humiliated. The students were perplexed, and asked the master, “Why did you allow him to treat you that way?” The teacher wisely responded, “If someone offers you a gift and you do not accept it, to whom does it belong?” They answered, “He who offered it.” “The same is true for anger, criticism, and disrespect,” the master remarked. “When they are not accepted, they will forever belong to the one who holds onto them.”

This is one of the lessons I would like for kids to take away from the incivility of this political season. Remind your children that no one has the power to make them feel anything unless they give them permission. They are always in charge of their emotions and reactions to people and events. They never have to become victims to discourteous words, rumors, or disrespect.

A ruthless barbarian general confronted a holy man who was quietly meditating in his cottage. When the holy man refused to acknowledge him as conqueror, he shouted, “Don’t you know who I am? You are looking at the man who could strike you dead without batting an eye!” The holy man raised his gaze to the general and calmly said, “Don’t you know that you are looking at a man who can be struck dead without batting an eyelid?” The general was speechless. He slowly bowed low and left the man without another word.

Whenever you see your kids not allow other’s words or actions bother them, acknowledge them as the kind of person who has the strength of character, courage, and wisdom to stay above the fray. That kind of behavior is true freedom, where you never allow others to affect your mood or sense of yourself. You become more inner-directed and are not swayed by popular opinion or cultural imperatives.

It’s been difficult to find good role models for this kind of character in our politicians. Look for stories of leaders like the ones in these tales to teach kids about true power and leadership.

Listen to my new podcasts entitled “Raising Daughters” by clicking the link below; I will address topics on understanding and supporting girls, including  recent topics like hookup culture podcast and Would you really want your daughter to become President of the US? 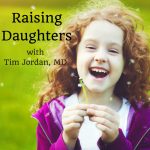