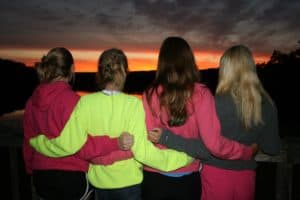 Many teenage girls today hook up with guys and have sex.  These encounters are often described as being casual, random, emotionally detached, and with no strings attached.  But I have wondered  if that’s really true.

Being a child of the 60’s and 70’s, I am no stranger to sex, drugs, and rock and roll.  Since drug, cigarette, and alcohol usage and teen pregnancies all peaked in the 70’s, perhaps I need to tread lightly in these areas.  So I went to the source, girls in these age ranges, to get the whole truth, and nothing but the truth.

One of the things I found out is that the large majority of the girls today are almost always wasted or high when they hook up.  Girls and women told me that they would not have done it if they hadn’t been drunk.  When I ask them what that might tell them about the experience, there is an uncomfortable silence.  They haven’t really thought about it in this way before.

Something else I have heard over and over again in retreat settings with girls in high school and college: most regret their first intercourse experience, and wish it had been different.  It was usually a hook-up kind of experience.   Girls also tell me that predictably after a hook-up, most guys stop calling them or paying attention to them unless they are partying and he wants some more fun in the sack.  It seemed okay at the time, but in retrospect, they wish it had been with someone they really loved; someone they had been in a more intimate relationship with.

So even though it is 2019 and we are way past the sexual revolution days, I believe that sex still has emotional ties for many girls.  Most girls still want it to mean more than just a random,  instantaneous romp.  All the more reason for them to get really clear about what they want before they ever go to a party or get into the proverbial backseat with a guy.

Years ago, one of my camp counselors told me an insightful story that might make sense of all of this hook-up business.  She had been drunk at a party in high school, and a guy forced himself on her and they had sex.  Like many girls, she never reported it, but carried a lot of pain with her because of it.  When she was in college, she dated a guy for 2 years before they decided together to have sex.  What she told me next has never left me.

“I lost my virginity the night that guy raped me, but I decided to not let it ruin my life or relationships with guys.  When I decided I was ready to have sex again, it was with my boyfriend, whom I was in love with.  I am very clear that that was the first time I had made love, which is a really crucial distinction for me.”

Are hook-ups meaningless?  After hearing from my girls, what do you think?