Sitting in a circle with six 13 year old Saudi girls was an amazing experience for me last week.

I have just returned from spending time in Saudi Arabia, and part of it allowed me the privilege of meeting with some girls from that culture. I was really interested in hearing their stories and learning how they see their lives. So much of what we see and hear about them from the US perspective is negative; oppressed women with faces covered with black veils.  So it was fascinating to get some info from the camel’s mouth you might say, and to hear these adolescent girls discuss their reality. 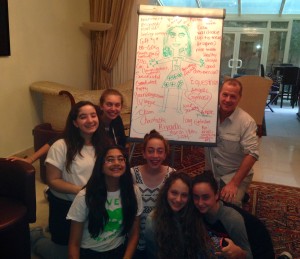 First and foremost, it was amazingly  similar to my experiences sitting with girls in my camps and at schools here in the US. They have the same buoyant energy that is so captivating to me. These girls were open, fun, light, and serious all at the same time. Like teen girls in the US, they loved to talk and especially about their experiences and stories from growing up.

One of the things that caught my attention was how driven and ambitious they were. They described a desire to get all A’s in school so that they could attend an Ivy League college in the US or a top tier university in Canada or the UK. They have bought the narrative that life and in particular the job market is uber-competitive and so they need to be at the top of their game to survive and thrive. In the past 5 years especially, women in Saudi have been allowed more freedoms than in the past. Most girls from their country, whether rich or not, have the goal of going to college and then working. This may not be true for the ultra-conservative factions, but it is for the majority of Saudis.

Some laws have been changing to allow more women to be employed, but it is a work in progress. Women still cannot drive a car, so they are at the mercy of husbands or other men to drive them everywhere as mass transit is pretty non-existent. Women who work in shops in the malls can often only wait on other women, not men. There are even stores that men can’t even enter as they are labelled ‘family stores’. Some places allow men only if they are married and with their spouse. Again, it’s a work in progress.

But the passion I felt from my new 13 year old friends convinced me that the times they are a-changing there. These girls were powerful, articulate, and focused. They reminded me of middle school girls I talk with at my retreats and camps, who also feel the pressure to be perfect and at the top of their classes. And like their US counterparts, they feel stressed from the pressures to succeed and get a high paying job after their schooling.

I also learned that Mark Zuckerberg had better start finding a new innovation to capture girl’s attention as they spend most of their electronic time on Instagram, rarely Facebook. They text a ton as well, just like girls in our country. They told me that most kids get their iPhones and pads by the time they are 8-10 years old, and a Saudi newspaper article revealed that kids and teens there spend the same amount of time each day with technologies as US kids, about 8 hours. They are not supposed to use their phones during class, but they too disregard that rule and sneak it every chance they get.

I will write more blogs describing what I learned about the kids and parents in Saudi, but for now, suffice it to say that middle school girls there seem to come from the same cloth as girls here in the US.